The most of the chlorine and caustic is produced through NaCl electrolysis with membrane electrolyzers. The process is highly energy demanding, but a significative power consumption reduction could be reached using an oxygen consuming Gas Diffusion Electrodes (GDE), as a substitute for the conventional hydrogen evolving cathodes. 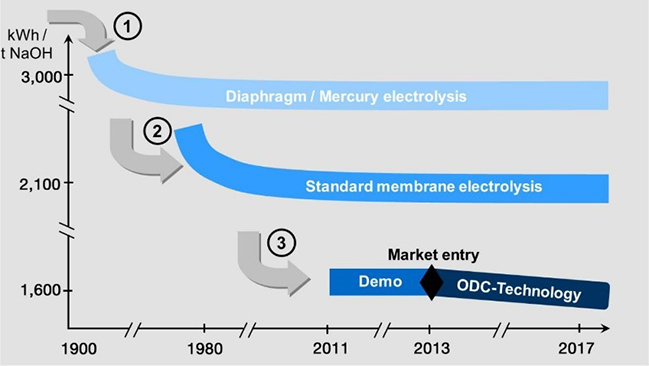 The NaCl_ODC electrolysis process differs from the conventional membrane process on the catholyte side, whereas the anolyte side remains the same. On the cathode side, oxygen is also introduced, which suppresses the formation of hydrogen.
This leads to a significant reduction of the cell voltage. Consequently, Oxygen Depolarized Cathode technology cuts energy consumption by up to 25%. Or vice versa, at constant energy consumption, a corresponding capacity increase is possible. In economic analysis of the technology, the costs of oxygen production in air liquefaction plants and the absence of hydrogen marketing or application opportunities must be considered and may slightly mitigate the total returns due to energy savings.
Full compatibility of electrolysis cells and brine cycle easily allows the new NaCl_ODC and the conventional membrane technologies to be combined in one plant.

Ask an expert Our presence 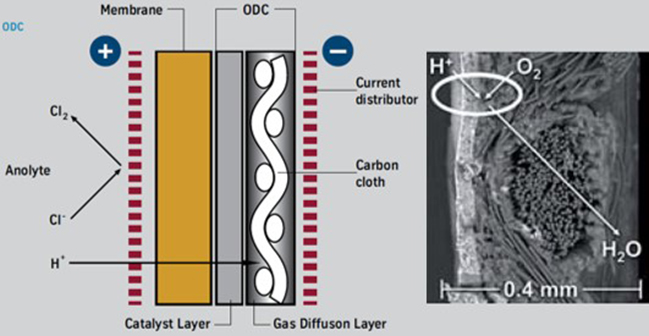 In the HCl_ODC electrolysis oxygen is first reduced at the cathode side and subsequently reacts with the hydrogen ions migrating through the membrane.
Generation of hydrogen is suppressed, resulting in an operating voltage less than approximately 1 volt versus the standard reaction of hydrogen generation, as well as the related energy savings.
The HCl_ODC process saves about 30% of the usual energy consumption and therefore reduces the indirect carbon dioxide emissions involved in its production accordingly. The chlorine formed with the oxygen depolarized cathode process is of a very high purity.

HCl_ODC technology has been developed and industrialized by Thyssenkrupp Uhde Chlorine Engineers, Covestro and De Nora.
The catalyst used for the cathode depolarization is based on RhxSy (Rhodium Sulphide) and is exclusive property of De Nora.

Applications and Customers We Serve

Discover More about our offering