Water is a key growth area as the Blackstone-backed company strives for €1 billion in annual revenues. A big-ticket acquisition could be next on the cards. Paul Hasler, North American Editor - Global Water Intelligence, spoke to Paolo Dellachà, CEO of De Nora, to learn about the latest developments in the company.

Italian electrochemical technologies specialist Industrie De Nora has completed the back-to-back acquisitions of US-based companies MIOX and Neptune as it continues to expand its water technology interests with a view to targeting €1 billion in annual revenues.

CEO Paolo Dellachà explained to GWI this month that water is a key strategic growth arena for the group as it looks to leverage its long history of developing electrode technologies for adjacent applications. De Nora established itself in the water treatment space through the $99 million acquisition of Severn Trent’s water purification business in 2015, and the company’s water technologies segment accounted for approximately 40% of its €462 million annual revenues in 2018.

“Looking ahead, water is going to become the main focus of our future M&A and internal investment,” Dellachà explained to GWI. “There’s a lot of fragmentation in the market, and we want to be considered a top leader in the space,” he added.

In February, De Nora cemented its leadership position in the market for on-site hypochlorite generation for water disinfection when it announced the acquisition of MIOX from Johnson Matthey.

MIOX’s on-site electrochemical generators are tailored to smaller applications than De Nora’s own portfolio of electro-chlorination systems – which use seawater or brine for water treatment and biofouling control – and will therefore broaden De Nora’s water interests in the municipal business, and in industrial sectors such as food & beverage. While ostensibly a move to pick up a smaller competitor, Dellachà argues that there is minimal over-lap between the two firms, noting that De Nora has been supplying electrodes to MIOX for over two decades.

“MIOX has been able to enter into areas and applications that De Nora wasn’t able to before, and so by combining the technologies we have a wider customer pipeline and a wider range of system sizes in brine electrochlorination. On the other hand, we are entering new segments such as the cooling tower business, where De Nora was not yet present.” 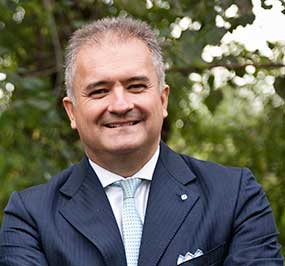 Meanwhile, the acquisition of oilfield services firm Neptune Enterprises earlier this month will provide De Nora with service capabilities in the booming US oil & gas market. While both firms have partnered since 2012 to supply De Nora’s treatment technologies to the oilfield for frac’ water disinfection and produced water recycling, Dellachà wanted to bring the service arm in-house.

“We decided to have the proper boots on the ground in a very fast developing segment,” he told GWI. “The frac’ing never stops so you cannot leave a customer down for hours – being able to provide services and parts 24/7 is key.”

He added that the deal will complement existing produced water recycling partner-ships with other oilfield water service firms such as Aqua Terra Water Management, and highlighted the scope to expand out-side of west Texas, where Neptune is currently based.

“We’ll start in the Permian because that has tremendous [water management] needs, but we’re already moving into other basins like the Marcellus, and perhaps in the medium term we’ll be outside the US looking at other frac’ing activities world-wide,” he said.

Although the majority of De Nora’s broader water business is focused on the US – where many of its water acquisitions have been based – Dellachà explained that the company is also witnessing growth in Asia, where it is supplying tertiary treatment equipment in China. The company also picked up a contract last year to pro-vide its water disinfection technologies to ten WTPs in Hong Kong.